All images by the ICZ and TLA (The Land Archive, Singapore)

Singapore is often known as a Garden City, but this is an impersonal image of anonymous trees and gardeners. Our project aims to boil this generic image down to specifics by exploring the concrete, personal connections that Singaporeans have made with trees. After all, what is loving nature without loving the individual plant?

Through our interviews, we found that people relate to plants in touching and occasionally surprising ways. For example, a group of Buddhists have been circling a rubber tree for an hour a day, for the past few years, as a form of walking meditation and to absorb the tree’s “energy”. A mangosteen tree has been sheltering a man for 20 years, since he saved it from the bulldozers. Another woman cries when her trees don’t fruit.

Besides featuring in individual stories, trees are living, breathing markers of history. The trees in our collection are of different ages. Some are old native species from pre-colonial times, when Singapore was mostly a freshwater swamp forest; others are younger trees that their owners planted from seeds.

The images in the project are influenced by vintage hand-tinted Singapore postcards. In fact, Singapore, very old tree is named after the title of one of the oldest postcards in the National Archive, a 1904 picture of an unspecified tree.  The project consists of a total of 30 trees. Some of which are featured below.

Singapore, Very Old Tree is a permanent exhibition at the National Museum of Singapore.

Angie Ng, in her 70s, author of A Guide To The Fabulous Figs of Singapore

In 2005, together with a group of nature enthusiasts, Ms Ng wrote A Guide to the Fabulous Figs of Singapore. Her favourite tree is this beauty standing at the entrance of the black-and-white colonial bungalow at 162 Mount Pleasant Road. Estimated to be at least 30m tall, covering an area of 91m2, the fig has scores of pillar-like roots that extend to the ground. It has also spread itself so it forms a gateway-like arch that predates the actual gate to the house.

This tree is a bit of a mystery. There is another banyan tree of a similar size in the Botanic Gardens that was planted in the 1850s. Ms Ng believes that the specimen at Mt Pleasant is planted around the same time, perhaps even from the same parent, making both of them about 150 years old. After all, both trees are roughly the same size – having a rare tree girth of more than 30m.

In the 1960s, when he was a child, Mr Lai used to visit the former National Library with his siblings and pass by this handsome Sea Beam. Although he did not know what kind of tree it was then, it made a lasting impression on him.

Now a botanist based in Pulau Ubin, he is passionate about native plants in Singapore and focuses on the research and preservation of trees here.

Before the old National Library was demolished, he took his son to say farewell to the building. His son slid down the bannisters, just as Mr Lai used to do when he was young. Next, they went to stand under this old tree, where Mr Lai felt an overwhelming sadness. To his surprise, a caterpillar fell down right before their eyes. He wrote an essay on the day’s experience and his memories of the old National Library. The title of the essay was “That trees do cry”. 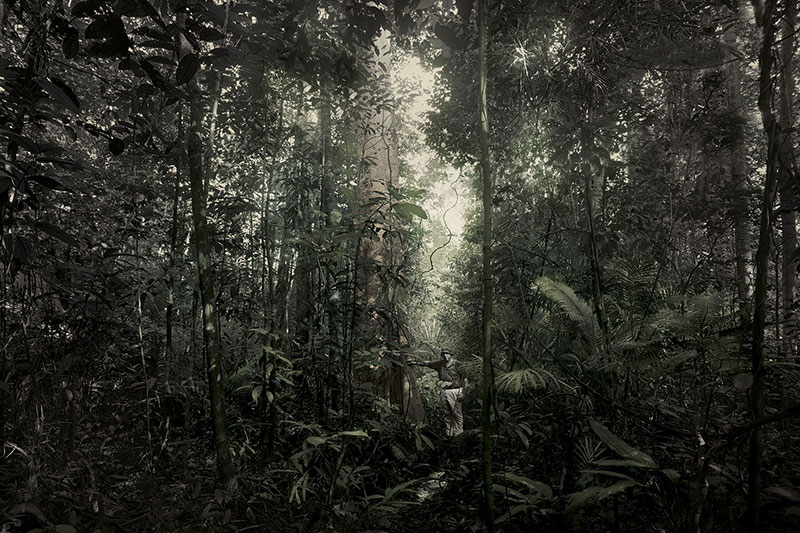 Mr O’Dempsey has been combing local nature reserves for the past few years in search of an endangered swamp species: Alstonia Pneumatophora. His favourite tree pictured here is estimated to be more than 100 years old. Its knee-like roots dip into the water and grow out up to 25 metres away from the trunk to breathe.

Over the last 20 years, Mr O’Dempsey has explored almost all the forests in Singapore and documents his discoveries on his personal webpage, Flora Singapura. He once found himself sinking waist-deep into a swamp before realising that it was probably better to take someone else along with him next time. 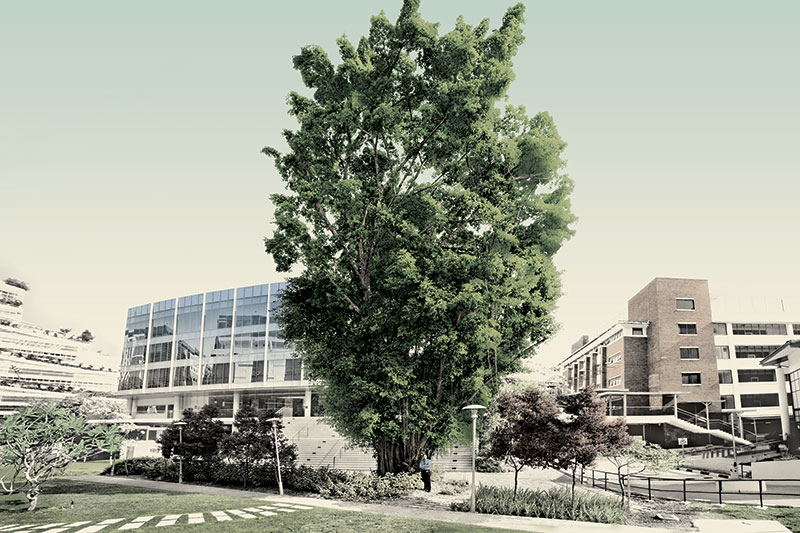 This tree was originally part of a larger, sprawling banyan tree slated to be removed in 2008 to make way for a new building. However, a peaceful and powerful student protest convinced the school to save the tree.

Experts from the Nature Society were engaged to conduct a survey on the ecological value of the tree. They found that it was likely to have pre-dated the establishment of Portsdown Road as a British military area during the 1950s.

Eventually, the school decided to shift the mother tree, its oldest part, 60m from its original location, to allow for the expansion of the school. Brian Teng, project director of the new school building, said that after the tree was hoisted out of the ground, it was left on its side for three days to allow animals to move out. During that period, they saw squirrels, king cobras, frogs and a 30cm-long centipede. The transplanted tree now occupies approximately 20m2, a far cry from its original 120m2 floor area. 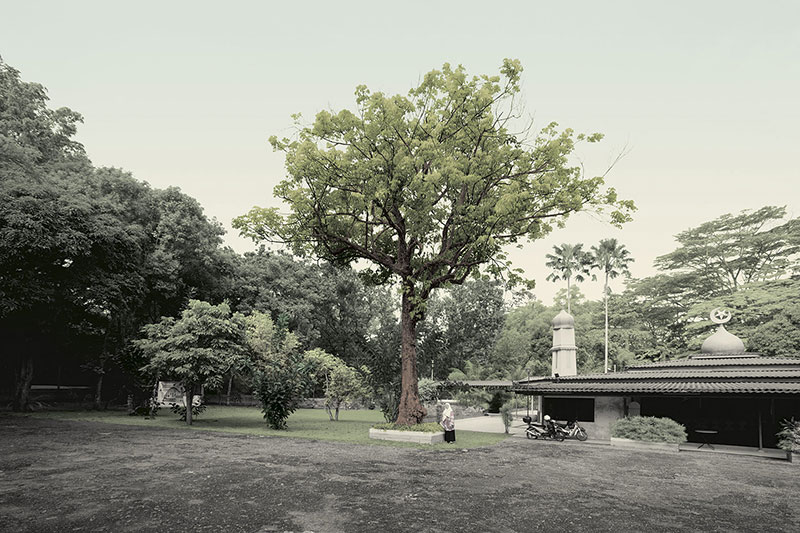 This rubber tree in front of the Masjid Petempatan Melayu Sembawang is the only surviving tree of an abandoned old rubber plantation dating to the 1900s. Madam Aminah, who works in the mosque, lived in a nearby Malay kampung in the 1950s and remembered playing hide-and-seek among the plantation with her friends.

Today, this rubber tree is still standing after multiple failed attempts at cutting it down. While some people have come to pray to it, Madam Aminah says, “To me, it’s just a majestic tree guarding the mosque.”

This rambutan tree, featuring grafted parts from different trees, is one of the surviving specimens from a private orchard owned by the late businessman and ceramics expert Han Wai Toon.

In this 2½ acre orchard, he not only produced what the Singapore Free Press reported as the “perfect rambutan” in 1960 by grafting, but also hosted visiting artists, poets and intellectuals. These included Nanyang artist Lim Mu Xue, who subsequently did a painting of the garden, and Chinese artist Xu Bei Hong, who dedicated an artwork featuring rambutans to Han.

In its heyday, there were 200 rambutan trees in the orchard. The orchard was sold to other owners in 1962 when Han left Singapore, and was later converted into a chicken farm. The farm was eventually evacuated when the state acquired the land. Now the place is overgrown and nearly impenetrable.

Deep in Bukit Panjang forest, there are about 100 durian trees left behind from a former kampung which was evacuated in the 1980s. Regular forager Mr Teo has been returning to this tree for the past seven years as it produces the sweetest fruit.

He believes that there are two generations of durian trees: The first being the original trees in the village, and the second being the new trees planted by former villagers to “earn” money from the government – a resident can get up to $110 for a durian tree of 3m on his land as compensation.

As for durian-picking, there are certain informal rules or etiquette. No one can lay claim to a tree: the fruit goes to those who come first. However, it is common for people to wait in two-hour slots. Some also wear safety helmets as they fear being injured by falling fruit. 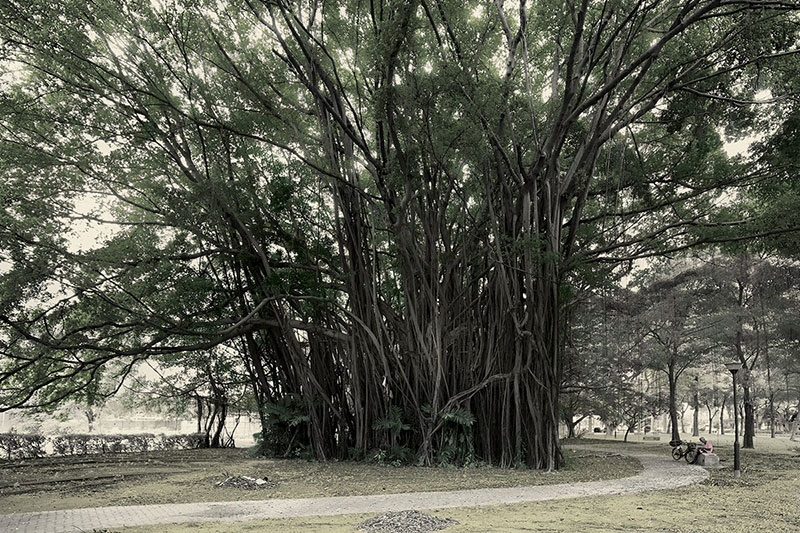 Every day for the past few years, retiree Mr Law rides his bike from Rangoon Road to rest under this tree. On a stone bench, he reads Chinese newspapers, snipping out articles and folding them into little squares after he is done. Sometimes he takes naps. He says he likes the peace and quiet.

He says he used to pass by the tree some 50 years ago when he was young, on his way to Gay World, where his aunt ran a stall selling tidbits and sweets.

Another regular visitor who goes by the name Mr Tan, says the place used to be called huo cheng, Chinese for fire city. He recalls that this used to be a kampung where people built boats, and the nearby Kallang River used to be very dirty before the park was set up. 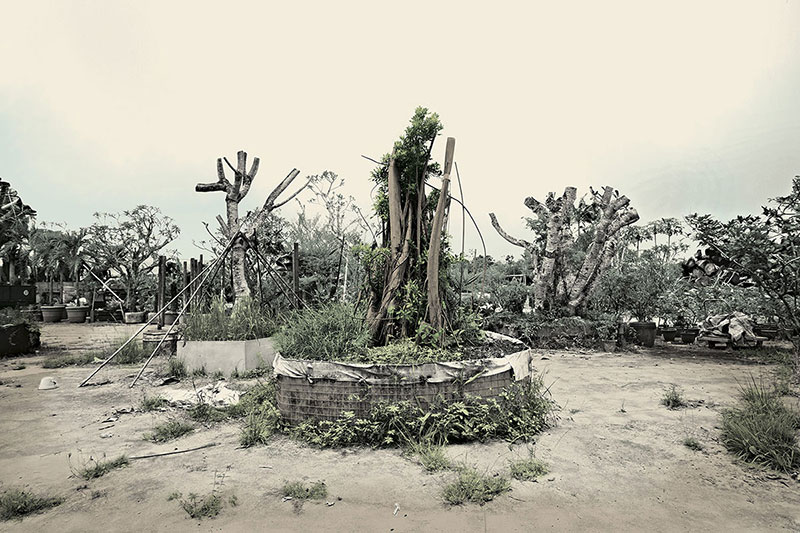 Behind the Substation, along the walls of Timbre, there used to be a massive banyan tree. Over the years, it had witnessed many of the changes to the art centre, as well as the evolution of the neighbouring civic landscape, such as the demolition of the National Library that used to be right beside it. In 2014, to make way for the construction of a new building for the Singapore Management University, the tree was uprooted to be transplanted to a yet-to-be-decided location.

The tree had been there before the Substation, which was founded in 1990 by Kuo Pao Kun. For many years, it had been part of the Substation’s Garden, sheltering the now-defunct Fat Frog Café, and had been the site of many events. Many artists, administrators and arts goers cherish fond memories of the tree, and some have even grafted parts of it to grow into seedlings.

The tree’s transplantation in late 2014 was a delicate process, in which the tree’s roots had to be slowly removed from a brick wall they penetrated. When parts of the banyan were cut away, some old bricks from the former National Library were found among its roots.


Singapore, Very Old Tree at the National Museum of Singapore

Copyright 2015, Institute of Critical Zoologists and The Land Archive