A BIRD IN THE HAND

Why look at birds

More than 10000 species of birds share the planet with us. Among animals, they are the most conspicuous of organisms and have evolved in one hundred million years to inhabit every landscape on Earth from the arid Sahara to the world’s least populated and coldest continent, Antarctica. Birds are also as diverse in forms as their habitats: they range from the flamboyant birds-of-paradise and manakins to more modest examples like the House Wren.

In the few thousand years of shared history with modern Homo sapiens, exceptionally complex, as well as sometimes nearly ironic relationships, have evolved between people and birds in general, widely revered by many of our earliest ancestors as masters of the air.

One bird whose recent history has almost always been intertwined with that of men is the domestic chicken. Its forefather, the Red Junglefowl, still runs about in the forests of Asia today. Large and fairly easy to catch, Red Junglefowls were trapped by early man for food and are still hunted by indigenous people for subsistence. In the centuries to follow after domestication, chickens became widely farmed for their eggs and meat, and are now one of the most important sources of protein worldwide. Of course, the influence of chickens permeates well beyond just being part of our diet. Chickens have left indelible marks on human cultures not just as providers of raw materials like feathers, but have also influenced local folklore, art and music.

Yet another example is the Common Nightingale, a surprisingly drab bird whose evocative song has not only made its way into literature, but also been cleverly stolen to embellish compositions by musicians like Handel and Respighi.

Birdsong and plumage are two qualities that are almost unknown in any other organism and have made many birds objects of admiration for millennia for those who lived close enough to hear or see them. The bizarre ‘horns’ and feathers of South-east Asia’s hornbills, and the flamboyant plumages of the birds-of-paradise of New Guinea are not only admired by native tribes when these birds are alive, but are accorded even greater importance dead. In Borneo, the Helmeted Hornbill was trapped for ‘hornbill ivory’, which was then elaborately carved, and treasured, by the Ibans. Similarly, in New Guinea, birds-of-paradise were decimated for their feathers which were made into headdresses for tribal ceremonies. In these instances, beauty had more meaning for these birds dead than alive.

Considering the special place of birds in the hearts of men, it is not even surprising to learn that these feathered wonders have been worshipped and given god-like attributes in historical cultures or carved into the myths of others. Perhaps because of their ‘special abilities of flight’, the Egyptians had some of their most important deities associated with birds. For instance, Horus is often portrayed with a falcon’s head, while Thoth has the head of a Sacred Ibis. The ancient Chinese and the Russians had their phoenixes and firebirds respectively, both examples of mythical creatures that might again have arisen from the wonders and special abilities perceived of birds.

The complex relationships between people and birds are manifested widely, even in modern society. We are constantly reminded of these complexities in ways that are sometimes not so apparent. The work in these pages to follow is an exploration of these complexities and reminds us that birds occupy a large and central part of that universe that human beings constantly carve out of nature.

Ding Li is an ornithologist and an expert in bird ecology. 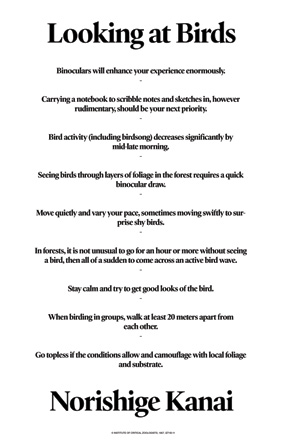