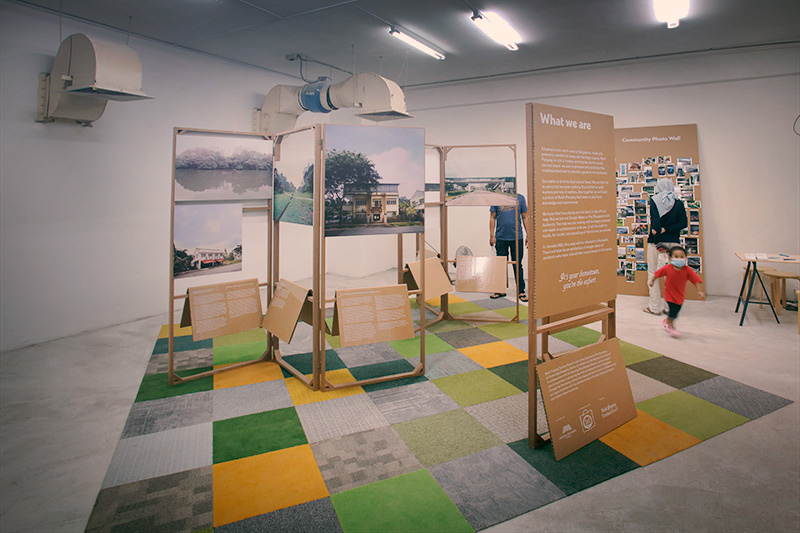 Bukit Panjang Tourism Board, a project by Adeline Chia and Robert Zhao.

Bukit Panjang Tourism Board is part of the Community Arts Residency at Greenridge Shopping Centre, an initiative by the National Arts Council in collaboration with the Housing Development Board. It aims to support practising artists in advancing the field of community arts in Singapore. Through the Residency, artists have opportunities to inquire, collaborate and co-create artworks with the community that will shape communal spaces and reflect collective stories. 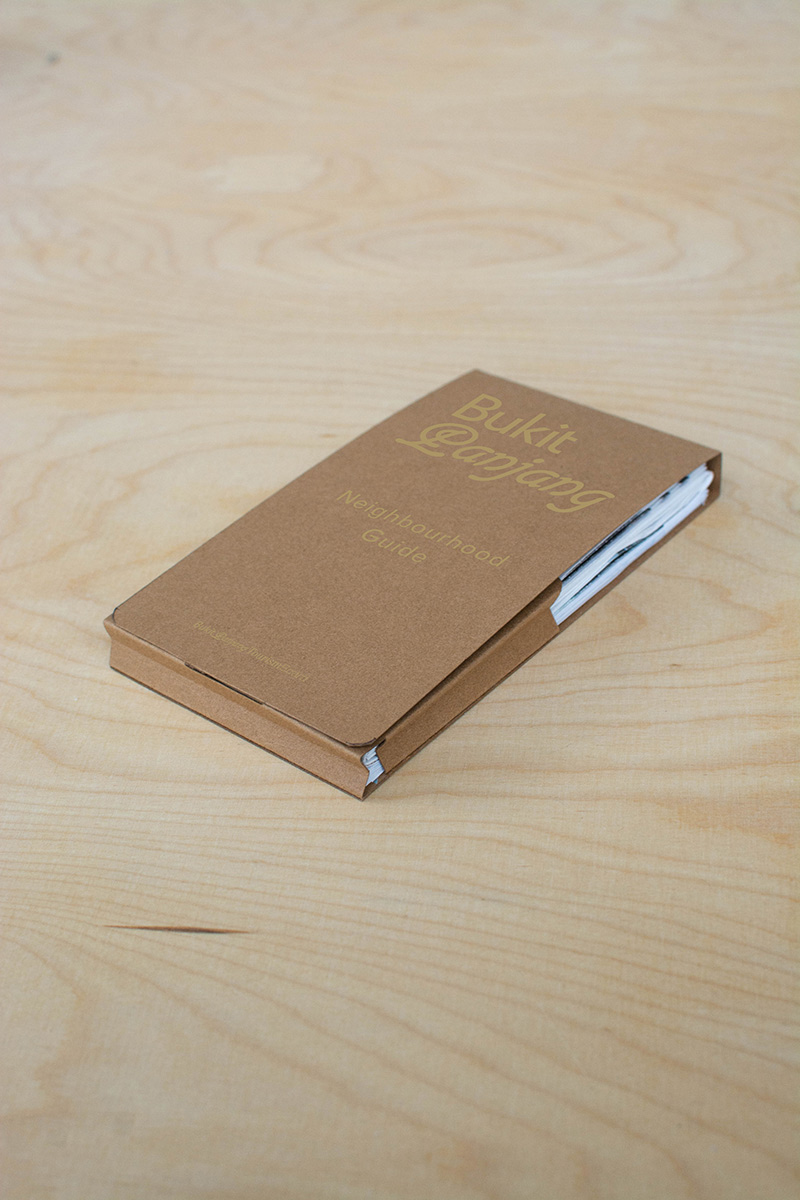 A set of postcards and map produced from the project. (Available, first quarter 2022)

Sample Postcards, from a set of 15 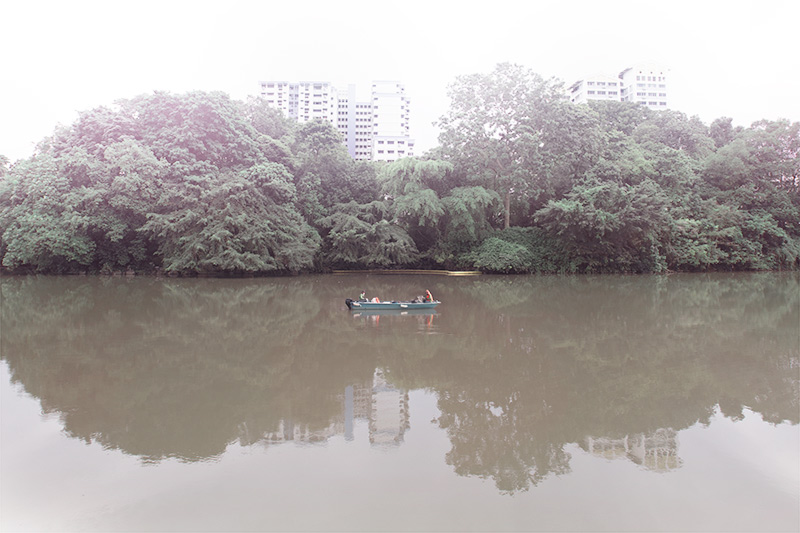 
On his first day of work, Mr Aris saved a drowning cat in Pang Sua Pond. The former sailor hadn’t operated the small motorboat before, and couldn’t get it to start using the pull cord, as he had been used to driving larger boats whose engines turned on by the pressing of a button. So he picked up the oars and paddled from the boathouse to the pavilion, and scooped the cat up using a net used to pick up floating leaves.

This was an exciting start to what would turn out to be a peaceful job. In their little blue boat and green long-sleeved shirts, Mr Aris and Mr Gwee are a familiar sight in the neighbourhood. Their duties are to go around the pond twice a day — 8am and 1pm — to pick up debris on the surface of the water. Mr Aris pilots the boat while Mr Gwee nets up floating objects, such as fallen leaves, twigs and rubbish from irresponsible visitors. They also do a little bit of pruning at the edges of the floating wetland and the banks. Each trip takes about 1.5 to 2 hours. Most days are quite leisurely, except when it has stormed the night before, and they can collect up to 20 trashbags worth of dead leaves and branches. Larger tree trunks are hoisted onto the boat and taken by the boathouse to be sawn.

Both men enjoy the idyllic surrounds. Mr Gwee, who lives in Yishun, has worked as a cleaner for more than 20 years in various places, including an army camp, factory and condominium. This is his favourite workplace. He notices wildlife such as otters and iguanas. “There is no other place like this in Singapore,” he said. Mr Aris, who was born in Pulau Belakang Mati (Sentosa),  had been a seaman for more than 40 years. Before he accepted the job, he had come with his wife for a walk on the boardwalk, to survey the environment. “I liked it, so I said, I can try.” Now he takes pride in keeping the pond clean and beautiful.

Pang Sua Pond is one of 16 stormwater collection ponds built in the 1990s, whose purpose is to collect rainwater runoff from the surrounding area and prevent flooding during a heavy downpour. The pond received a makeover and a boardwalk in 2017. 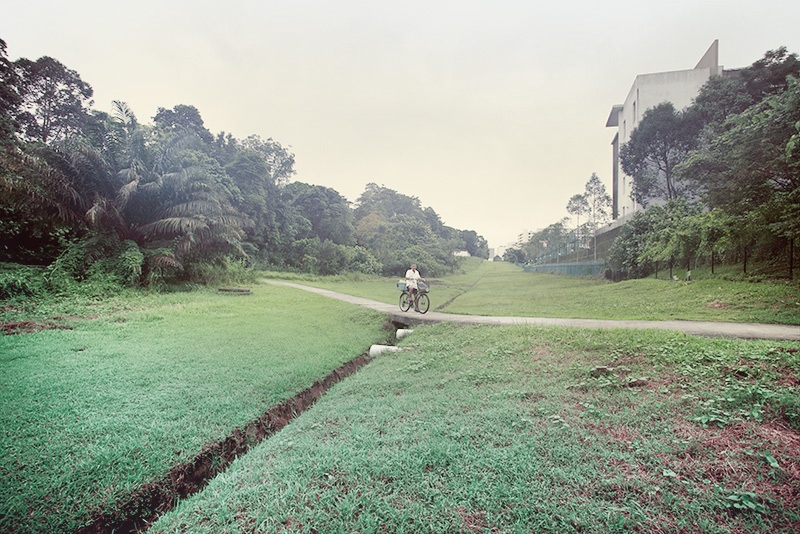 This retired lorry driver cycles to get spring water from a drain in Zhenghua Park two or three times a week from his home in Fajar. Each time, he fills up about eight five-litre bottles, which his family use for drinking and cooking. He says he is not used to the taste of tapwater, as he used to drink well water when he lived in a kampong in Yew Tee when he was younger.

The source of springwater, which flows out of a hole in the wall of a drain, is popular with local residents. To get to it, one has to climb over a fence and make a 1.5-metre drop down into the drain. Coming with bottles of different sizes in trolleys and bicycles, most take the water home for drinking. Some claim there are health benefits, which have not been verified, and one resident said he uses it for aquarium water.

Unlike most nature photographers in Singapore, Mr Chua is almost exclusively interested in Zhenghua Nature Park. The Segar resident has been visiting the park almost daily to photograph its wildlife for the past six years, since the park’s extension opened in 2015. To date, he has spotted over 60 species of birds, including the tiger shrike, crested honey buzzard, common flameback (woodpecker) and common tailorbird.

The retired technician also has a wide collection of super-macro shots of different insects. Some of these close-ups capture rare processes, such as the life cycles of snails, whose eggs are hard to spot and easily washed away by the rain.

Together with two other friends, he is putting together a photo book that documents the biodiversity of Zhenghua Nature Park.